Ermm ... for the sake of all our sanity, I'll keep the explanation of "why" short. Phonetically, [r] and [d] are quite similar to each other - both are articulated at the same place using the tip of your tongue. Really, the only articulation difference is the length of time that the tongue is in contact with the palate.

Actually, just taking a quick trip round the world, languages often change [d] into [r], and vice versa. In American English for example the -tt- between vowels has become much like [r] in words like matted, butter, and so on. So it's quite common for funny stuff to happen between or around r and d sounds. Let's just leave it at that.

So Gaelic introduces a [d] sound in sr clusters, but doesn't replace the r. It's the northern dialects that do this, as you can see on the map. 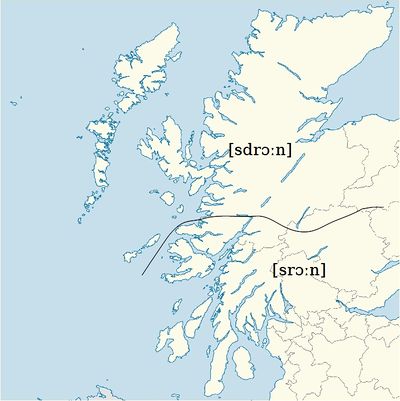 This gives rise to a never ending stream of discussions about spelling. Is it sruth, struth or even *sdruth? The answer is complicated. A quick cross-check with Irish and Old Irish tells us that indeed there was no such sound many moons ago:

So what's the problem? Twofold, really. The [sdr] pronunciation has been dominant for so long that it's started to creep into the spelling, bit by bit. And with overall literacy rates in Gaelic dropping and dropping over the centuries, people have followed the conventions less and their ears more. Similar to the slochd/sloc problem.

But the main problems are lenition and loanwords. Loanwords, like strì or stràbh show one peculiarity. Unlike sròn and srath, you can't lenite them: