So what about the language? Patience! The main thing that distinguished the Celts from other Indo-Europeans, in terms of their language, was the loss of Indo-European p. Pardon? Well, Indo-European, which is not recorded, but reconstructed based on what we know of its daughter languages, seems to have had an elaborate system of stops - though we'll be focussing on the subset of most interest to Celtic:

Next, for whatever reason, Late Common Celtic dropped p. It just did. But this is why the Indo-European *ph₂tēr "father" gives us Latin pater but Gaelic athair without anything at the start. Though Celtic wouldn't be Celtic with a bonkers special rule: if a word had an initial p and if there was a kʷ in the word somewhere, the p didn't disappear but became kʷ instead. So *penkʷe "five" became *kʷenkʷe. Look familiar?

That leaves us with:

This is the reason for a great many things. For example, it is the reason why Goidelic is sometimes referred to as Q-Celtic and Brythonic as P-Celtic. It's based on the development of the Indo-European word for 5, penkʷe which in Q-Celtic becomes cóic (remember, Goidelic dropped p) and in Brythonic pimp (remember, Brythonic kept p). That explains the P but not the Q. Well, it does, it's to do with arguments of how to spell the reconstructed Indo-European forms and what we write as kʷe today used to be qᵘ, hence the Q. As an aide-memoire, it also helps to remember that Manx spells cóig as queig.

It also explains some lovely loanwords like Càisg for Easter which is derived from ecclesiastical Latin Pascha (cf. Sp. Pasqua). Even some relatively late loans show this change, such as Norse upsi mature saithe which was borrowed as ugsa (and in some areas then metathesized to ucas).

Oh, and in case this kind of thing fascinates you, we've made a little picture for you of what happened to two words - hundred and five - all the way from Indo-European down to over 50 modern Indo-European languages here (note this family tree uses a quick-and-dirty form of IPA because using strict IPA would make it practically unreadable): 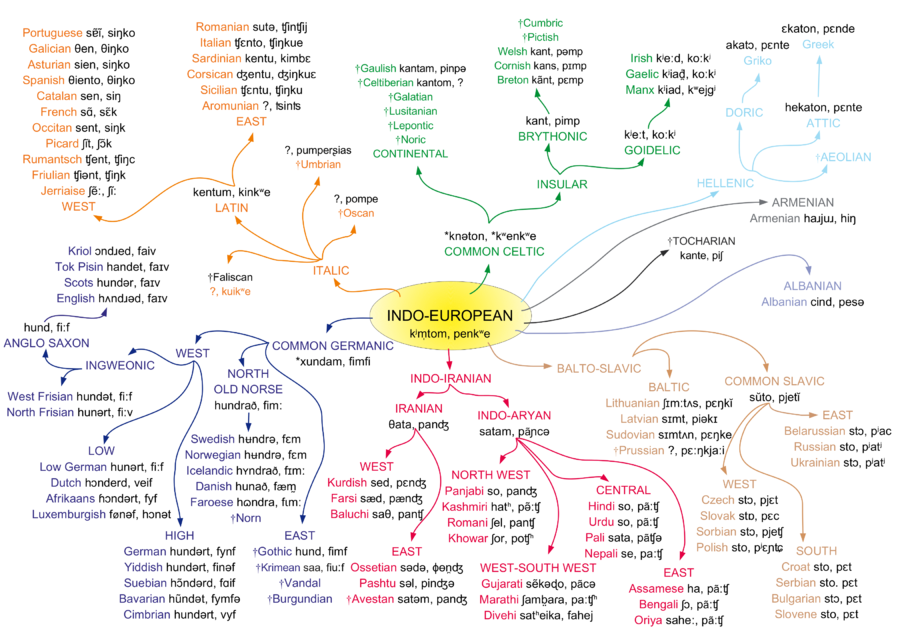